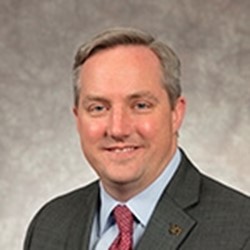 Mike Chapple is academic director of Notre Dame’s Master of Science in Business Analytics program and teaching professor of IT, Analytics, and Operations where he teaches undergraduate and graduate courses in business analytics and cybersecurity.

Prior to joining the Mendoza faculty, Mike served as Senior Director for IT Service Delivery at the University. In this role, he oversaw the information security, IT compliance, cloud computing, data governance, IT architecture, learning platforms, project management, strategic planning and product management functions for the Office of Information Technologies. Mike led Notre Dame’s Cloud First strategy which moved 83% of the University’s IT services into the cloud over three years.
Mike previously served as Senior Advisor to the Executive Vice President at Notre Dame for two years. Prior to that, he was program manager of the University’s Information Security Program.

Mike also previously served as Executive Vice President and Chief Information Officer of the Brand Institute, a Miami-based marketing consultancy. He spent four years in the information security research group at the National Security Agency and serving as an active duty intelligence officer in the U.S. Air Force.


"Cyberwarfare: Information Operations in a Connected World", (With David Seidl), Jones and Bartlett, 2014